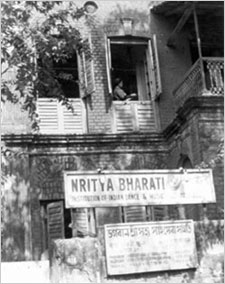 Leela’s lineage traces back directly to Lucknow and the court of Wajid Ali Shah, the last nawab of Awadh, who was a great patron of music and dance and a devoted student of kathak. It was through the rich cultural environment of Wajid Ali Shah’s court and his guru, Pt. Thakur Prasadji, that the Lucknow Gharana is believed to have originated. The lineage was continued by Thakur Prasadji’s nephews, Pts. Bindadin Maharaj and Kalka Prasad, also dancers at the court of Wajid Ali Shah. Bindadin’s three nephews, Pts. Achhan Maharaj, Lachhu Maharaj, and especially Shambhu Maharaj, were instrumental in training the next generation of prominent kathakas, including Achhan Maharaj-ji’s son Pt. Birju Maharaj, Smt. Kumudini Lakhia, Smt. Damayanti Joshi, and Smt. Maya Rao, as well as Pandit Ram Narayan Misra and Sri Prohlad Das — guru and father, respectively, of the founder of our kathak lineage: Pandit Chitresh Das.

Pandit Das’s remarkable upbringing and education were integral to developing his artistry and vision. His mother, a talented Manipuri dancer, and his father, a respected dance scholar, founded Nritya Bharati, an institute of dance, painting, and music in Kolkata. They invited many illustrious artists to teach at Nritya Bharati, including Atomba Singh from Manipur, Gurus Gopal and Krishna Nair from Kerala, and Guru Gunniya from Sri Lanka. In 1955, at age 10, young Chitresh tied strings with his guru Pandit Ram Narayan Misra, marking the beginning of his training in the guru-shishya parampara, or master-disciple tradition. With Pandit Misra, he trained rigorously in both the Lucknow and Jaipur gharanas. When staying with his guru, he would begin his dance at five in the morning and practice for hours on end. A powerhouse of speed, strength, and stamina, young Chitresh also absorbed the nuances of kathak when accompanying his guru to Bow Bazaar to teach baijis, courtesans. Pandit Das carried his guruji’s intensive and all-encompassing training style with him to the United States. Over 45 years, he trained multiple generations of students and disciples in the guru-shishya parampara, evolving the tradition to meet modern times. Pandit Das tied strings, formally marking the guru-disciple relationship, with very few, including Gretchen Hayden, Joanna DeSouza, Pratibha Patel, Charlotte Moraga, and Seibi Lee. Today, each of these women along with many “informal disciples” bear the responsibility for upholding Pandit Das’s lineage and standard while passing on the tradition to future generations. They do so through leading institutions around the globe, including Chhandika in Boston, M-DO/Kathak Toronto in Toronto, Chitresh Das Institute in the SF Bay Area, and Chhandam Nritya Bharati in India. Leela, with locations in San Francisco, Los Angeles, Denver, and New York, is proud to count ourselves among these esteemed institutions, continuing our guru’s lineage and bringing a deeply rooted pedagogical commitment to all of our students. 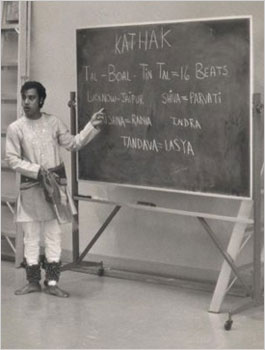 In 1970, Pandit Das received a Whitney Fellowship to teach Indian dance at the University of Maryland. With this entrée to the West, he began forging his own path as a pioneer bringing kathak and its rich cultural heritage to America. In 1971, he was invited by Ustad Ali Akbar Khan to join the Ali Akbar College of Music (AACM), where he established a rigorous dance program. Ali Akbar Khansahib’s college supported the development of another abundant period for Indian classical arts–this time, based in the US. During its heyday, the Ali Akbar College of Music sponsored several Indian artists of great renown, including Pt. Nikhil Bannerjee, Smt. Lakshmi Shankar, Pt. Shankar Ghosh, Ust. Alla Rakha, Pt. G.S. Sachdev, Pt. Dhyanesh Khan, Pt. Aashish Khan, Ust. Zakir Hussain, Pt. Swapan Chaudhuri, and others. Pandit Das was tremendously inspired by Ali Akbar Khansahib’s musical genius and created several choreographed works set to Khansahib’s music. Khansahib’s senior American disciples, particularly Peter van Gelder, George Ruckert, James Pomerantz, and Chris Ris, accompanied countless solo performances and dance productions. Dr. George Ruckert composed the music for many productions, including Gold Rush and Sita Haran. Decades later, Dr. Ruckert’s teaching inspired doctoral student Sarah Morelli to study with Ali Akbar Khansahib and Pandit Das, which led to the publication of A Guru’s Journey, her comprehensive book on Pandit Das’s development of the California Gharana of kathak. Today as a principal artist at Leela and professor of Ethnomusicology at the University of Denver, Dr. Sarah Morelli continues to nurture the musical sensibilities of the California Gharana, profoundly influenced by Khansahib’s music. 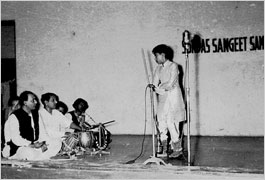 Growing up during a renaissance period for Indian arts and culture, Pandit Das was surrounded by inspiration, which he later drew upon in creating grand dance-dramas. His father, Nritya Acharya Prohlad Das, was recognized for creating one of the first revolutionary dance-dramas in pre-Independence India: Abhyudaya, meaning Awakening. Pandit Das was also inspired by Pt. Uday Shakar, renowned for integrating European theater techniques with Indian dance. Among his many achievements, Uday Shankar created a much-loved shadow Ramayana playat the Uday Shankar India Cultural Centre in Almora (featuring dancers in lieu of puppets) and toured much of Europe and America performing avant-garde theatrical ballets with esteemed musicians including Ustad Allauddin Khan and Uday Shankar-ji’s younger brother Pt. Ravi Shankar. Pandit Das brought this sense of innovation and grandeur to the modern stage in his large-scale kathak productions such as Gold Rush (1990), Darbar (1999 and 2012), Ramayana (2007), Sita Haran (2009), and Shiva (2013). Leela’s artistic directors, who trained directly with Pandit Das and were cast in lead roles in many of these dance-dramas, are continuing and building upon his work with productions such as Son of the Wind (2017). Through productions such as SPEAK and Son of the Wind Leela pays homage to Pandit Das’s artistic legacy and continues his work to elevate kathak dance on US and global stages.

Das’s upbringing in Kolkata, as well as his early years in California at the Ali Akbar College of Music, greatly influenced his vision for kathak dance and affirmed his belief in the need for artistic exchange and community. Simultaneously, as he innovated and experimented with the form through company productions and performances, he clearly saw the need to create a space for the art form to develop in its authentic, raw form: the traditional kathak solo. These complex forces compelled Pandit Das to bring artists across generations and disciplines together through festivals such as Kathak at the Crossroads. In 2006, this festival gathered over 30 kathak dancers and collaborative musical artists from the US, Europe, and India for talks, workshops, and performances. Similarly, in 2010, Traditions Engaged featured 50 artists representing eight Indian classical dance and music traditions, with performances and presentations in San Francisco and Los Angeles. Leela extends this work to provide a fertile ground for music and dance development, bringing together emerging and established artists with the touring festival, Continuum, which premiered in San Francisco in 2019. 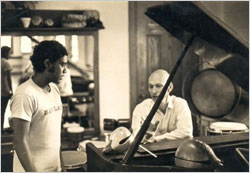 Pandit Das’s prolific career advanced the field of kathak not only through his choreographies and performances but also through his pedagogical legacy. Rooted in the tradition and training he brought with him from India, Pandit Das pushed the technical boundaries of strength, speed, and clarity of footwork, as well as many types of swift and stepping chakkars (pirouettes). In deeply examining Indian philosophy, he evolved kathak as a sadhana (devoted practice) through his preeminent innovation, kathak yoga. This inspired practice challenges dancers to integrate music and dance more fully by simultaneously singing, reciting, and dancing, and sometimes even playing an instrument. Kathak yoga took center stage in Shabd (2006), a production that propelled it from a solitary meditative practice to a stunningly complex and intriguing performance art. Leela Dance Collective continues to explore and push the boundaries of kathak yoga in its work California Gharana. Moreover, all Leela students, from beginner to advanced, are trained in kathak yoga. This practice is foundational to our pedagogical philosophy and provides students with a deep, embodied understanding of the relationship between rhythm and movement.

The strength of Pandit Das’s vision for the art form has been passed on to many generations of dancers. Leela is honored to play a leading role in advancing the field of kathak throughout the US and internationally to forge a vibrant future for the art form and ensure that this legacy thrives for generations to come.