Seema Kantak, Ph.D., is Senior Vice President, Biologics & Biotherapeutics at Exelixis and is a scientist working in discovering new medicines for cancer. She lives in San Francisco with her husband Shreeraj, son Nishad, and daughter Inika. Seema identifies herself as a life-long learner and loves traveling, reading, gardening, cooking, and music. 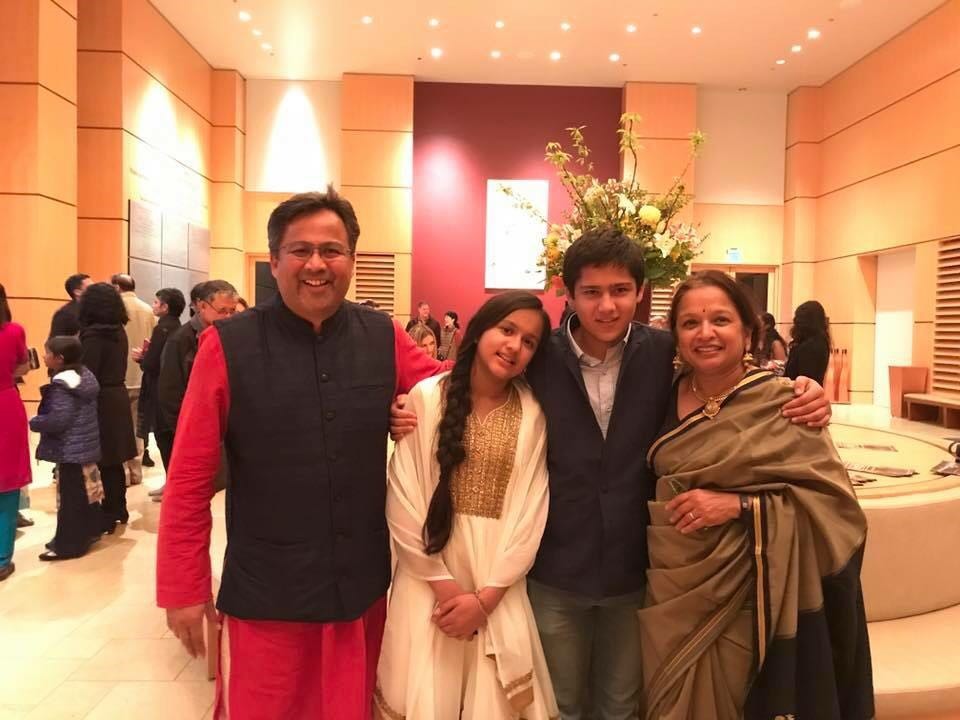 You’ve been involved with Chhandam for a long time. Can you share a little about how you first became involved with Leela, and how that has changed over the years? (as a parent …)

I think I should start with the story of how I even found Chhandam.

I had decided that if I ever had a daughter, that she would learn kathak. I had learned some classical music but I had never learned dance, and kathak as a dance form was always very appealing to me. So when my daughter Inika was four years old, I thought I should start looking for a dance class for her.

We lived in San Francisco, and one day I accidentally came across a flier advertising Chhandam kathak classes, I don’t even remember where. This was in 2009. I remember calling the phone number on the flier. I spoke with Rachna Nivas, and first she said, we typically start at age six, so if your daughter is four, I don’t think she can start yet. But then she paused and said, you know, why don’t you bring her and let’s see.

So that’s the point where our journey began, with my daughter starting to learn, and me being there in class every week. There was a gap in between because we moved to India for a couple of years, but we always kept a connection.

There was something about these classes that was unique and different. Even when the classes in San Francisco were stopped and we had to go to Berkeley, and then Fremont there was enough of a draw that we would drive from San Francisco to Berkeley 2 times/week. That’s when I met Seibi Lee, and she really became one of the foundations of my relationship with Chhandam and now Leela. I remember meeting Seibi for the first time in 2012. Her story, the way she taught, and how she had imbibed the whole Indian classical art form – not only in terms of the dance but in terms of who she was. She understands Inika very well … Indian classical art is a part of my daughter’s life which has and will continue to shape her in so many ways, and I think she’ll be a lifelong learner of kathak.

I got to know more about Chhandam, Dadaji, and most importantly the disciples and artists, primarily when I was approached to help with the organization after Dadaji passed away. I got involved more deeply as the organization began to reinvent itself and rebuild itself, and I got to know each one of the artists individually, all of the artists Dadaji had trained over the years.

That is what cemented my relationship with this organization. The art form was already there for me, because I grew up with Indian classical art. Music was a major part of my family’s life growing up, we would go to those concerts in India that would go on all night, we would literally fall asleep watching/listening to something as small kids.

I think one of the most compelling things for me is the Pranam. I remember we went to my daughter’s first class, and she did Pranam, and the music played in the studio, and that really struck me, it was something very different and enlightening. For both my husband and I, there was something about it that drew us in. Even today when I sit in on a class, or if she is at home doing a zoom class, when she starts her Pranam and the music starts, an emotion bubbles up which I can’t even explain. It’s such a unique expression which you feel in your core as you listen to it.

So the journey started with my daughter, and I’m very glad that it happened that way. Getting to know everyone at Leela has enriched our lives so much. 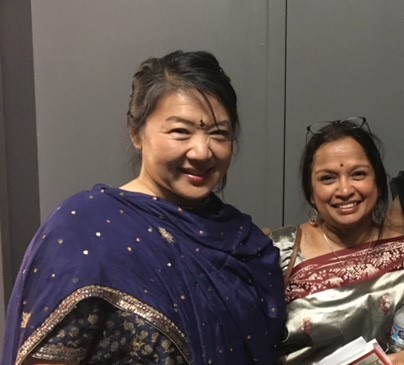 Why is it important to you, personally, to support the arts in general, and Indian classical dance in particular?

I’m a scientist by training. Firstly, I really wish that I had learned dance when I was growing up. My family was a very academic family, so academics was always the priority. And I was never into sports or physical activity. When I was growing up in India, sports was not something that girls did a whole lot, and for a lot of families, culturally, dance was not something that you automatically went into. Music was more something that was accepted, dance was not. I’m glad to see that that has changed now, a lot of young girls and young boys, both, are going into dance classes now. But I was very much an academic geek, and science was my interest.

As a child I used to sing a lot. I trained a little bit in Indian classical music for a couple of years, and much more later on in life. I always knew that in my most stressful times, in teenage years and throughout my life, my default was always music. It wasn’t about changing my mood as much as to help me think through and find solutions with Indian music in the background. If I need to think through something, or solve something, I always listen to music and that helps. I think that is the reason that Indian arts has become so important to me. I don’t get the same thing from western music, I don’t know if that’s just because I didn’t grow up with it, but it has to be Indian classical music for me.

Again, I’m a scientist. There have been studies published in neuroscience on how Indian classical music changes our thinking. Whether it’s a rhythm or a particular tune or raga, it moves you, heals you…so the impact is more than just enjoying music in the moment. That’s something that has always stayed with me. I came here as a grad student so I couldn’t afford to support arts early on in my life in the US, but right from the beginning I knew that supporting the arts was something that I wanted to do. I always felt that, once I was able to – for lack of a better word – afford it, I wanted to be a donor, and be supportive of artists in whatever way I can.

Wherever you are in your work, or in life, music gives you a sense of stability. When I mentor people, students in my field, I always ask them, how much do you resort to music and to arts? It changes your mood, gives emotional stability, and it rejuvenates your mind. That rejuvenation piece is so important, and for me, personally, it absolutely has to be Indian classical arts. So that’s one part of it. So I have always been a huge supporter of the Indian arts and artists.

Another thing is, being in the US, when you’re away from your culture and everything you’re familiar with … when you’re walking in the street in India, you’re surrounded by music, you’re listening to some kind of Indian music all the time, right? You don’t get that over here, and so I started thinking about it more. What did music do for my family, what did it do for my community? It matters.

One of the things Leela and Chhandam have given me is community. Of course you don’t necessarily find commonality with everyone who is Indian, but there is a thread there of something that we all share in common….a commitment to the art either as the artist or the patron. That has led to building relationships for me with the Leela community. When I think of Rina, or Seibi, or Rachna, or Poonam, all of them are not only a part of my life but also a part of my daughter’s life. They have taught her so much….not just kathak but also finding her inner strength, her self identity, her voice and connection to India. To me that is important, particularly because when you are away from India raising kids here, you need that community you can find common ground with.

And the third thing is, without support, it’s very hard for the arts to survive. Even in India, where everybody knows the art form, it’s so hard to make it as an artist. Here, nobody knows about it. So for me it becomes even more important to really support not just the art, but the artists doing the art. That’s what Leela is doing. We always talk about supporting the arts but that’s not what it is. It is the artist behind the art. For me that is the key: it all comes back to the people who do it and not just that the art form is there. 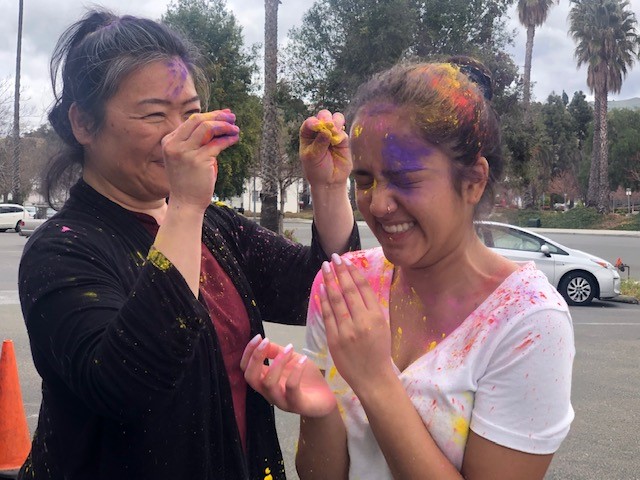 What do you want others to know about why Leela’s work matters?

It’s the commitment, passion and conviction that they can make a difference. Many artists come here, they start schools, in the Bay Area there are so many kathak schools and people go and learn in different ways, but at Leela there is an energy and a commitment that I feel is unique. Again, it’s really about the individuals who make Leela. These are people who have given up what they could have had financially – I really feel it’s important to call that out. It’s not about making money or having a career, and it’s not just about going out there and performing. It’s really rooted in teaching. The artists who perform are the ones who are teaching, they are the ones who are building the community, doing community outreach. And when I say community outreach, I’m not just talking about getting students into the school. It’s about building the art and truly supporting the artists and each other in good and bad times. That is the uniqueness that I want to call out about Leela. Kudos to them for doing that. I’m going to continue to support Leela as much as I can, to the last day that I breathe on this earth! I request the Indian American community to support Leela and make it part of their life and see the transformation they feel for themselves….Namaskar!